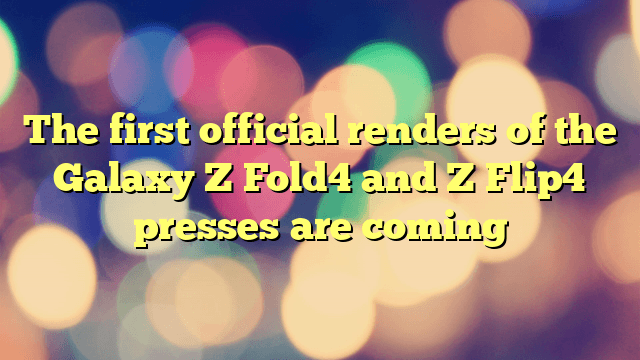 Here we go, our first look at the upcoming Galaxy Z Fold4 and Galaxy Z Flip4 through what appear to be official press renders. The first two images are courtesy of Evan Blass in collaboration with 91Mobiles. First up is the Galaxy Z Fold4 in what are supposed to be the official launch colors – Phantom Black on the left, Beige in the middle, and “Grey-Green” on the right.

The render shows a design that’s almost indistinguishable from the Galaxy Z Fol3 – a side-mounted fingerprint scanner on the right rail, a volume rocker above, while in the top left side there’s a SIM tray. The other image shows the Galaxy Z Flip4 in gray, purple, gold, and light blue. Again, there doesn’t seem to be much of a difference in how the Galaxy Z Flip3 looks.

The following render comes from MySmartPrice and reveals more than just the colors and the bottom of the phone. Namely, the secondary display, which appears slightly wider than the current phone’s outer display. It’s rumored to be a 2.1-inch, while the Galaxy Z Flip3 is a 1.9-inch. And here’s a bonus press render from Pricebaba. It maintains the continuity of 91Mobiles renders, so we assume it’s legit.

If these renders indeed turn out to be true, then the Galaxy Z Fold4 and Galaxy Z Flip4 will look nearly identical to their predecessors. What we do know so far is that both phones will get the new Snapdragon 8+ Gen 1 chipset and Samsung will unveil them on August 10th. The Galaxy Z Fol4 should have better cameras – a 50MP wide, 12MP ultrawide and 10MP 3x tele, as well as a 10MP outdoor selfie and a 16MP under-screen camera inside, which will shoot 4MP footage in pixels.

A hopeful rumor points to a thinner hinge and slightly wider screens. As for the Galaxy Z Flip4, expect more or less the same screen and cameras, but an increase in battery capacity and charging – either a 3,800 mAh or 3,900 mAh battery and a 25 W load.