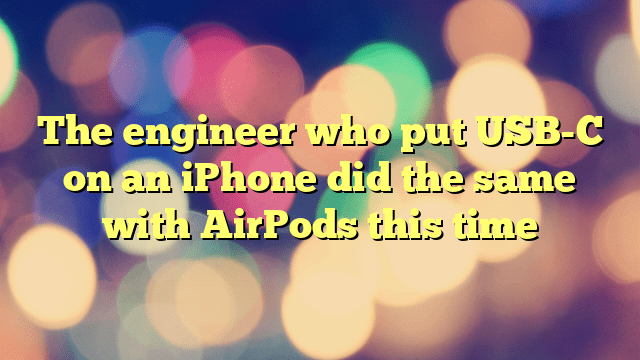 We have already covered two of Ken Pillonel’s viral edits here on the site. In November, Pillonel successfully modified the iPhone X with a fully functional USB-C port. Then in April, Pillonel equipped a Samsung Galaxy A51 with a Lighting port. The projects show that products can indeed use universal connectors even if the company that made them does not want them to. Pillonel’s latest venture is the case of AirPods. The video begins with a phone call to Apple where Pillonel is told by an Apple representative “it’s more economical to just swap out the case” in case the charging port or battery is damaged. AirPods batteries aren’t hard to find, and they’re relatively inexpensive. The proprietary Lightning connector, however, isn’t something you can just buy from a website, so if you want to replace an AirPods case’s charging port, you’ll need to find a donor case. In the case of Pillonel, a USB-C port solution would have to be developed from scratch. Pillonel’s designs are available to anyone who wants to make them. Then we would enter the AirPods case, which is impossible to do without destroying the case. For this, Ken designed a replacement AirPods case that can be easily reassembled for future battery or connector maintenance. Pillonel has made his creations open source so that anyone who wants to get into this project can do so. He hopes that by making these solutions available to everyone, more AirPods cases can be refurbished and given new life rather than ending up in a landfill. If you are interested in purchasing a kit, you can submit your email address at the bottom of the project website: AirPodsDirtySecret.com although kits may only sell out if there is enough interest .