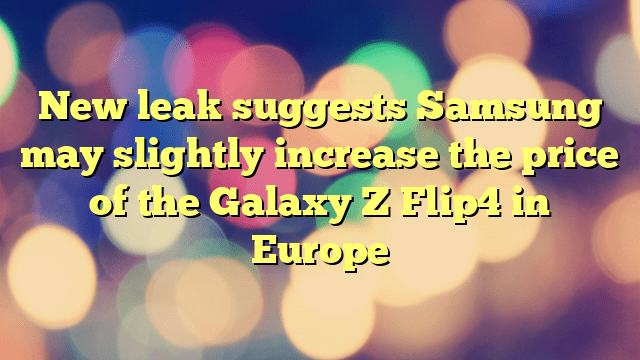 Samsung’s Galaxy Z Flip4 will be announced at Samsung Unpacked on August 10, but a new report from Pricebaba reveals the retail price of the new foldable device in Europe. Samsung Galaxy Z Flip3 The base model Galaxy Z Flip4 is expected to cost €1,080 with 128GB of storage. Meanwhile, the 256GB and 512GB variants will cost €1,160 and €1,280 respectively. The mention of a 512GB variant is intriguing as Samsung hasn’t had a Z Flip model with that much storage on board. The Galaxy Z Flip3 launched in Europe with a retail price of €1,049, so an upward price adjustment makes sense given the major currency inflation that is being felt in many countries around the world. Samsung Galaxy Z Flip4 rendered by MySmartPrice The Samsung Galaxy Z Flip4 is expected to feature a Snapdragon 8+ Gen 1 and powered by a larger 3,800 or 3,900 mAh battery. It should support up to 25W charging. The foldable screen and camera setup should be similar to the Z Flip3. Source