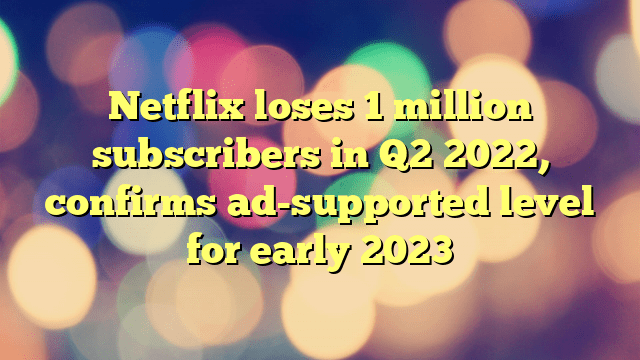 Netflix expected a tough second quarter with a sharp drop in paid subscribers, but today’s financial report revealed a much less bleak picture than expected. Between April and June, the platform lost 970,000 memberships instead of the expected 2 million. This led to a 7% increase in stock prices after hours trading. The cheaper ad-supported tier is expected in early 2023, and the same timeline applies to cracking down on the 100 million households that don’t pay for the service but use shared passwords. Losing 1 million paying customers might be a blow to the company on paper, but its revenue still grew by 8.6%. Netflix revealed that this was done by an increase in the average number of paid subscriptions and ARM (average revenue per subscription). The number would have been even higher, but Netflix lost $339 million due to the foreign currency impact. As the company strengthens its positions in global markets, the strength of the dollar is negatively affecting its dollar-denominated results. Netflix also warns of challenges ahead and informed investors of short-term and long-term steps that will boost sales. The company’s forecast for Q3 2022 sees subscribers grow by 1 million, up from 4.4 million in Q3 2021. Microsoft’s integration for the ad-supported tier is key for Netflix and plans are to introduce the new plan at the “beginning”. 2023”. It will come to markets first where people tend to spend more and once Netflix learns how the new plan works, it will expand to other regions. That would bring more paid subscribers on board, the company hopes. We’ve already announced that next year will be the year when Netflix finally gets around subscribers sharing passwords. According to the report, more than 100 million households are not paying, in addition to the 200 million accounts that have already paid. Once the company decides which method to use, they will implement the new plans and features. Source